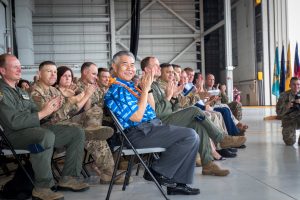 Governor of Hawaii, David Ige, observes an assumption of command ceremony Aug. 4, 2019, at Joint Base Pearl Harbor-Hickam. During the event, Col. Dann S. Carlson assumed command of the Hawaii Air National Guard’s 154th Wing from Brig. Gen. Gregory Woodrow. Prior to coming to the 154th Wing, Carlson was the Assistant Superintendent, for Hawaii’s Dept. of Education, Office of School Facilities and Support Services. He served in various capacities as an active duty Airman; F-16 instructor/evaluator pilot, Harrier exchange pilot, Thunderbird pilot, Fighter Squadron commander and Deputy Joint Base commander were some of the positions he held during a 25 year active duty career. (U.S. Air National Guard photo by Capt. Blythe Goya)

A ‘standing-room-only’ crowd of family, friends, and fellow 154th Wing Airmen packed into a C-17 Globemaster III hanger on the JBPHH flightline to say mahalo and aloha to its past and present leaders.

Woodrow who had been at the helm since 2016, retires after 33 years of military service; after guiding the Air National Guard’s largest wing. Future endeavors include increasing his surfing time and pursuing a second career in commercial aviation.

During the ceremony Woodrow said ‘mahalo’ to the personnel, who contributed to the wing’s success, spoke fondly of his guard ‘ohana’ (family) and left some words of wisdom for Carlson as the incoming commander.

“These folks here…give them a vector, a little vision,” said Woodrow. “Because these guys are professionals and they know how to succeed.”

Carlson, an Air Force Academy graduate, served 25 years as an active duty Airman in various capacities. Prior to coming to the 154th Wing, he was an F-16 instructor/evaluator pilot, Harrier exchange pilot, Thunderbird pilot, Fighter Squadron commander and Deputy Joint Base commander.

Retiring from active duty in 2018, his service to community continued as the assistant superintendent for the State of Hawaii Department of Education, Office of School Facilities and Support Services. After a brief military retirement he joined the HIANG, as the director of plans and programs.

Carlson was handed the 154th Wing gaidon, or colors, representing the ceremonial passing of authority from one commander to the next.

“As men and women of the 154th Wing,” said Carlson, “we are in a great trajectory and I want to see us keep it that way. The priorities that General Woodrow set out will continue for now. I will be getting out to all the different units in the next 90 days. I look forward to meeting with you and learning how we can improve this highly effective team.”

The 154th Wing is comprised of nearly 1,900 officers and enlisted Airmen making it the largest and one of the most complex wings in the Air National Guard. The wing executes several mission sets which includes federal response to national threats as well as state response to domestic civil emergencies.