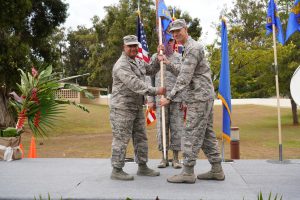 The Hawaii Air National Guard mark the expansion of its air defense mission with the creation of two new units.

In his remarks Brig. Gen. Okahara stated that the 298th ADG is the second group in a plan to have two wings in the Hawaii Air National Guard, a kinetic wing with the flying mission, and a terminal wing that is more cyber and space oriented. The plan is moving faster than most would think. The third group could be established in a year’s time frame according to Okahara.