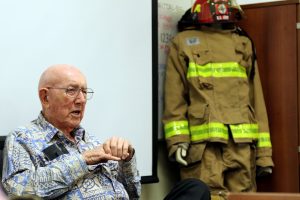 Davis sat stoically in the chair, his head cocked to one side due to his poor hearing. His hands folded over the grip of his walking stick and his experienced eyes were surveying the room of Soldiers and the distinguished guests in attendance who had come to hear him speak. Davis spoke confidently, not fazed by Maj. Gen. Arthur “Joe” Logan, Hawaii State, Adjutant General and Brigadier General Kenneth Hara, Hawaii State, Deputy Adjutant General, and along with the Senior Enlisted Leader Command Sgt. Maj. Dana Wingad who attended to hear Davis speak.

“I was in one of the first ten firefighting units created,” Davis said. “We were one of four units to deploy overseas to Africa. I made the landing on D-Day plus one on the southern French coast, but not Normandy.”

Davis, a Firefighter Historian, and last surviving member of the 1204th Army Engineer Firefighting Platoon, had come to the Hawaii Army National Guard’s 103rd Troop Command Armory in Pearl City, Hawaii to provide a professional development seminar to the 297th Engineer Fire Fighting Team. Davis became the Historian of his unit 30 years ago.

“I was born blind in one eye,” Davis said. “So, I figured the Army wouldn’t want me. But I registered with the selective service as by required by law. A few months later, the Army said, ‘We want you!’” The room laughed, as Davis chuckled.

Davis entered the United States Army as a selective service limited service inductee early of 1943. Due to his limitations, Davis was not permitted to deploy into combat.
Davis would not initially serve as a firefighter for the Army.

“I started in another Corps,” Davis said. “The Army came looking for people like me that had had experience in wild land fires. Which I had had from the National Park Service. There weren’t many with firefighting experience. We had some training and some the job training. That was typically how we learned how to fight fires, ‘OJT.’ Between the end of World War I and December 7, 1941 there was no class of Army firefighter, they didn’t exist.”

Six months later, he was deployed to Noran, Algeria.

“One year later, I’m hitting the beach on D-Day plus one,” Davis said. “We are very proud of what we did, in many respects. We were by in large, selective service inductees with no fire experience.”
Davis would go on to tell the role of the Army firefighter during World War II.

“When we went to shore in France, we had 37 men and five fire trucks,” Davis said. “We had engineer firefighting platoons that fought anything that burned, military or civilian.”

The 1204th Army Engineer Firefighting Platoon served a number of roles from supporting engineering missions as well as supporting combat operations. They were able to utilize their equipment to accomplish missions that normal military equipment could not accomplish.

The Army firefighter was also called upon to directly support combat operations on the front lines of the war.

“When we went into the forward areas, we worked behind the artillery,” Davis said. “Because the adversary would be throwing incendiary rounds, trying to burn the guns out, and would set fire in the process.”

Davis’ history and connected to the lineage and the roots of the 297th FFT Command.

“He loves firefighting,” said Command Sgt. Maj. Thomas Odoardi, 103 Troop Command Sergeant Major. “He loved the job. He’s sharing that history with our guys, sharing their roots. In regards to professional development, it was an opportunity for our small firefighter group to learn from somebody who did it in World War II. It was amazing. We have such a diverse set of Military Occupational Specialties, anytime we can capture history from the past, especially from a veteran, it’s invaluable”

“We got to learn our history,” said Staff Sgt. Julius Fajotina, Readiness Non-Commissioned Officer for the 297th FFT. “I didn’t think firefighting went back to the Legions of Rome. Knowing where we came from and knowing what we equipment we have now, it’s amazing what firefighter Davis accomplished.”

Davis is the last surviving member of his unit and his story will continue on through the Soldiers of the 297th FFT.

“We did what we could, with what we had,” Davis said. “It wasn’t adequate, but we are proud of what we did.”