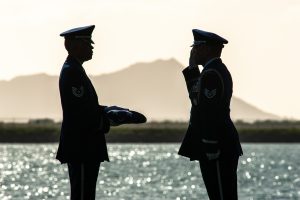 It’s almost a universal phenomenon, knowing that some of life’s best experiences seem to come-and-go at the blink of an eye. Teenagers create unforgettable friendships and memories over a few short years in high school, as do some young adults who pursue a college education. Perhaps it’s even rarer for people to work side-by-side for decades on end. Two such friends in the Hawaii Air National Guard found just that while serving in a prestige organization, which spanned the greater half of their careers – as members of the Hawaii Air National Guard (HIANG) Honor Guard.

Unlike the most common Honor Guard participants, who serve for a portion of their time in their twenties, Tech. Sgt. Mark Crabbe and Staff Sgt. Darrell Bactad started their time in their 30’s and remained active well into their 50s. Together, they performed in numerous memorial ceremonies, military observances and community outreach events.

The HIANG Honor Guard team was first established in April 1999, but Crabbe and Bactad first became acquainted with each other as students at The Kamehameha Schools in the 1980s. Crabbe, a senior at the time, was volunteering as an orientation counselor for the incoming freshman class, which included an eager and adolescent Bactad. It was up to Crabbe to show Bactad the ‘ropes’ of high school life, a gesture that would be returned more than 20 years later.

As one of the few original members of the Hawaii Air National Guard Honor Guard team, Bactad was considered a seasoned veteran who guided inbound candidates and newly appointed members, to include Crabbe’s entry in 2001.

Bactad developed a strong capacity to help mentor and train junior members, knowing that the original team learned how to perform and operate with minimal resources. Early practice sessions were merely based on printed directions, without an instructional video for reference. Bactad said he often looked back at his only experience at a official ceremony for inspiration.

“I remember being at my uncle’s funeral,” said Bactad. “He was an Army veteran, and that’s where I saw the funeral honors ceremony for the first time. I watched every movement the Honor Guard did. How they folded the flag, fired their rifles and how taps was played. I didn’t know anything about the ceremony except that it meant so much to me and my family. So, I thought to myself one day, since I’m already in the military that would be an absolute honor to do. I don’t know how I’m going to do it, but if there’s an opportunity, I would go for it.’”

Only a small portion of Airmen are selected to take on the role of ceremonial guardsmen, as they are expected to uphold the highest standards of professionalism, discipline and military bearing. Bactad, Crabbe and the rest of the team were charged to represent Air Force heritage and preserve the legacy of veterans at funeral services throughout the Hawaiian Islands.

One of the most touching services Bactad participated in was the Joint POW-MIA Accounting Command (currently adapted as the Defense POW/MIA Accounting Agency) ceremonies at DV row on Hickam Air Force Base. A joint-service team from all branches receives the remains of POW/MIAs in flag-draped caskets off a C-17 Globemaster III. Backtad said the solemn ceremonies overwhelmed him with goosebumps each time, knowing that fallen warriors from past generations were finally being repatriated and brought home.

“What we do in the Honor Guard, isn’t something we do for a medal,” said Crabbe. “It’s just another way to give back service to those who truly deserve it most. When people realize it, everyone really has a lot to offer and there are so many ways to do it. Of course, there’s a fine balance to it. I see it as a mix between family time, personal time and community service time. Personally, I don’t think there’s anything better than providing service to others.” When family members come up to you and say thank you for doing this for their loved one, it makes us more proud to be able to do this for grieving families.”

Like many units on Joint Base Pearl Harbor-Hickam, the HIANG Honor Guard personnel integrates with active duty partners from the 15th Wing; although there can be a noticeable difference between the two teams.

“When we do funerals with the active duty team, we’re doing the same thing alongside 19 and 20-year-olds, said Bactad. They’re young enough to be our kids.” It’s just amazing thinking about the age difference. We don’t have nametags on our Honor Guard uniforms, so it doesn’t matter who performs the ceremony, the main thing is we perform as ‘ceremonial’ guardsman; one team, one fight.”

“It’s definitely a wow moment for them,” Crabbe added. “They’re just surprised to see us still being passionate for the program. We’ve had so many people come and go over the years, but for some reason, we stuck it out. And the one thing that’s remained the same is our enthusiasm for this role, and it’s lasted with us until today.”

With Honor Guard experience under their belts, it also provided an outlet for both Airmen to serve Veterans in other capacities. Bactad took his involvement even further and sought out membership into a second unit that is unique to the Hawaii Islands – the Hawaii National Guard’s Royal Guard. Members of this ceremonial unit don traditional uniforms, dating back to the 19th century, which serve to re-enact the royal bodyguards of the Kingdom of Hawaii. Bactad, and a select-few guardsmen from the HIANG, have been active volunteers for the Governor, performing at state functions since establishment in 1962. Bactad currently holds the second highest position in the HIANG Royal Guard, Luna Koa.

Eventually, Bactad arrived at a pivotal point in his military career in 2014, when he faced the option to retire after serving in the 154th Logistics Readiness Squadron for 28 years. Bactad had his reservations about retiring, knowing that he would be leaving the HIANG Honor Guard team shorthanded and void of a superintendent.

Crabbe said he could see how Bactad had mixed feelings about leaving and suggested that he could apply for a vacant personnel position within his own unit, the 204th Airlift Squadron. However, the new position came with a slight caveat.

In order to qualify for the new position, Bactad said his previous rank of Master Sergeant would need to be dropped two ranks. Despite being 54-years-old and a seasoned First Sergeant, Bactad was excited to start over again on a new career path.

“With all the things we do, we don’t think too much about our age,” Bactad said. “Yes, things can be a little harder on our bodies, but even that doesn’t stop us. If people can just let go and forget about surface level details like their age, nothing is going to hold us back.”

Not only was he able to reenlist into a new career field and retain his membership in the Honor Guard, Bactad said he found a new family within the 204th Airlift Squadron and ended up traveling more than he ever had before with the HIANG.

“Being part of the [204th AS] ‘Pueo’ Ohana has been a definite blessing for myself to be a part of,” said Bactad. “I’ve got to travel to New Zealand, Japan, Philippines, and Guam on our C-17 ‘Manu’ (meaning bird in the Hawaiian language).”

Since then, the two friends worked side-by-side and continued their Honor Guard services. They also stayed active in other community service events, such as the Special Olympics, Great Aloha Run and The Hawaii Food Bank. On occasion, they have been seen trying to raise morale for no apparent reason, such as waving and welcoming Airman at the start of drill weekends, while raising a sign that says ‘Fly Like a Champion.’

Crabbe and Bactad finely tuned their own unique sets of niches throughout their careers and made sure their passions shared everywhere they went. To friends and wingmen throughout the HIANG community, it’s an emotional experience to see one’s career come to an end, as Crabbe officially retires this month.

While their professional partnership has finally reached an end, Crabbe said the friendships connections made in the ANG are bound to last a lifetime.

“We simply believe in small acts of kindness without getting anything back in return,” said Crabbe as Bactad nods in agreement. “That’s what Aloha is all about. It’s wonderful that we got to be part of these organizations for so long because they’ve empowered us to reach out and make an impact on others. But when it’s time to move on, it’s not a problem. Because if my career has taught me one thing – there’s always a way you can be of service to others. No matter what.”