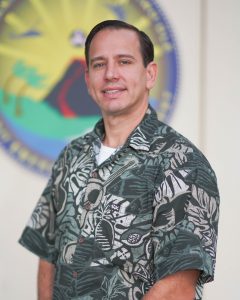 “Tom came in as the HI-EMA administrator at a critical point for our state and he did an amazing job in a very short time,” said Hara. “Tom restored confidence following successful responses to disasters in 2018.”

In 2018, Travis led HI-EMA in the face of historic rains that swept over the counties of Kaua’i and East Oʻahu causing severe flooding and mudslides. Kīlauea erupted with lava flows that resulted in the devastation of over 700 homes. During the same year the state also responded to Tropical Cyclones Lane and Olivia.

“It has been an honor to serve the people of Hawai’i and keep them safe,” said Travis. “I am certain I leave the well-being of our islands in more than capable hands.”

As HI-EMA’s Executive Officer, Meyers was responsible for administrative management, fiscal monitoring, legislative coordination, and disaster mitigation, as well as many other duties.

“I am honored to have this opportunity to lead the Hawai’i Emergency Management Agency,” Meyers said. “There is a solid team in place and Tom has established a strong foundation for our State Emergency Management Program. I look forward to strengthening the resilience and disaster preparedness for Hawai’i.”

State of Hawai‘i, Dept. of Defense