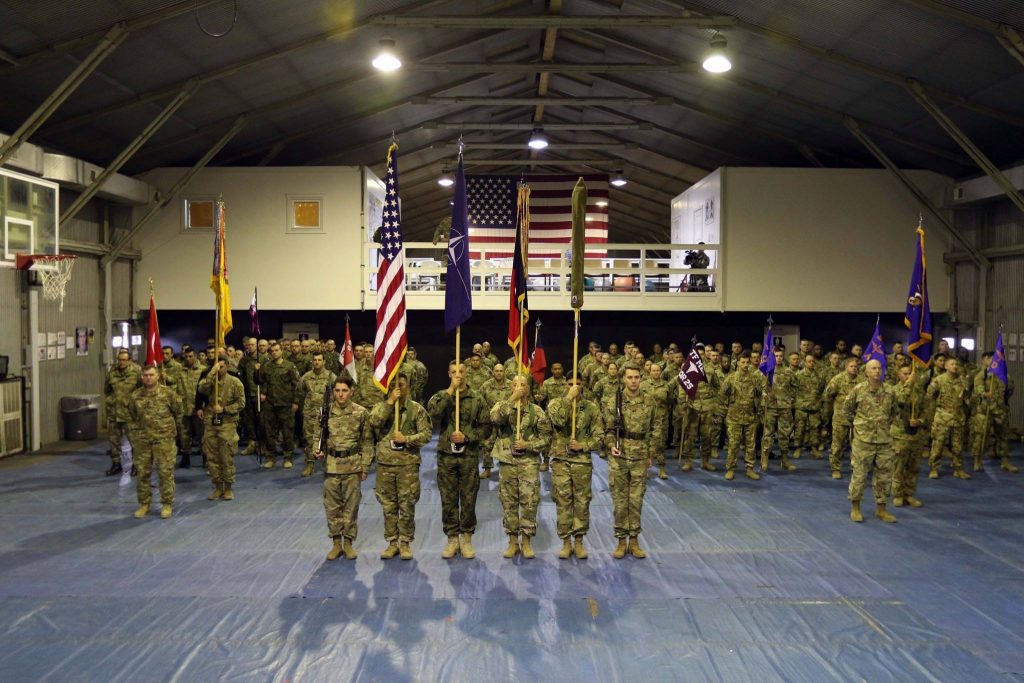 Kosovo Force (KFOR) Soldiers participate in a Transfer of Authority ceremony at Camp Bondsteel, Kosovo, Nov. 17, 2018. During the ceremony the command team from the 79th Infantry Brigade Combat Team cased their colors, signifying the completion of their deployment, followed by the 29th Infantry Brigade Combat Team uncasing theirs. This signifies the continual support of the KFOR Multinational Battle Group-East mission and the enduring commitment NATO has to the people of Kosovo. (Hawaii Army National Guard Army National Guard Photos by Sgt. Tinisha Mellein-Fortson/Released)

During the ceremony, the 29th Infantry Brigade Combat Team (29IBCT), Hawaii Army National Guard, assumed command of Multinational Battle Group – East (MNBG-E) from the outgoing 79th Infantry Brigade Combat Team, California Army National Guard.
“This is a great opportunity, and we are going to do great things here,” said U.S. Army Col. Roy Macaraeg, MNBG-E commander.
Macaraeg wished outgoing KFOR 24 commander Col. Nick Ducich best of luck and thanked him and his entire team for doing such a great job during their rotation.
During the ceremony, the outgoing commander expressed his satisfaction as the commander of KFOR 24 MNBG-E. The commitment to the people of Kosovo by maintaining a safe and secure environment for all was deeply appreciated by all in attendance.
“For the incredible Soldiers who make up the Lava Brigade, you have the unique aloha spirit that automatically brings people together in friendship,” said Col. Nick Ducich, outgoing MNBG-E commander. “We hand this mission off to you knowing that you will achieve greater success while preventing further scarring of this land due to violence.”
This deployment is the first of its kind for the 29 IBCT, but the role of providing safety and security is not.
Prior to deploying to Kosovo, Soldiers of the 29 IBCT assisted in the state-of-emergency lava flow incident on the Big Island of Hawaii. Soldiers assisted with security in-and-around the lava impacted areas.
Macaraeg says that, situations like the lava flow ensure our readiness is at its peak.
“We are well trained, well-led, and well-equipped to address the complex situation in Kosovo,” said Macaraeg. “We have a great multinational NATO team, and we are looking forward to working with everyone.”
The transfer of authority reaffirms the KFOR mission and enduring commitment to a safe and secure environment for all people of Kosovo.