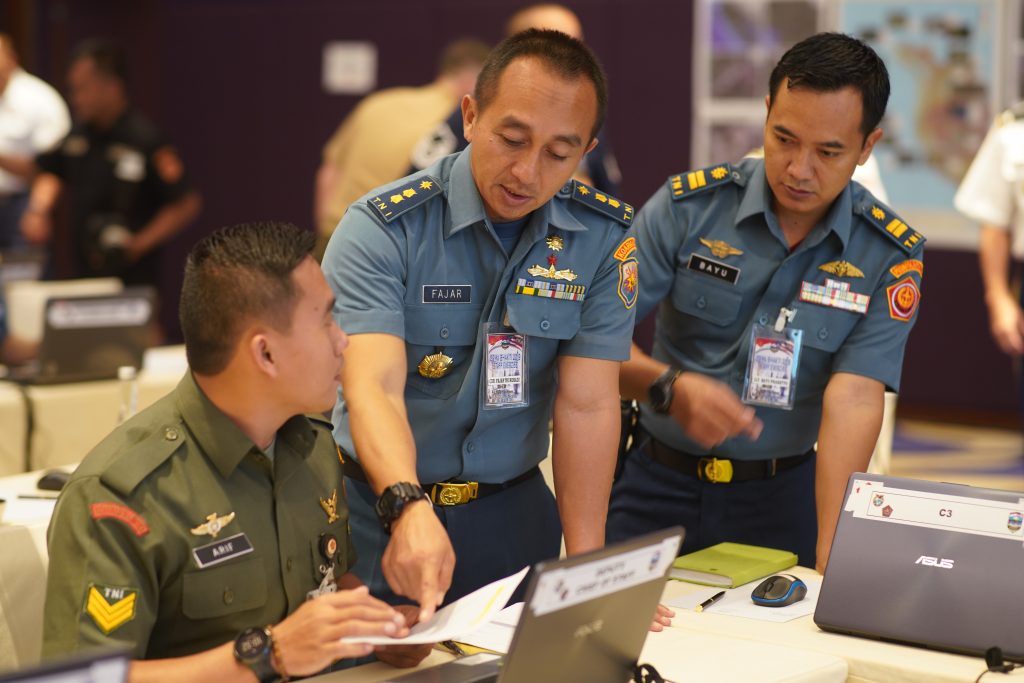 “Every year, the Hawaii State Partnership Program looks at next year’s GEMA BHAKTI theme and establishes way points for that year’s engagements with the TNI,” said Capt. Marco Hartanto, HING SPP director. “We then build out our plan to ensure the key areas of operations that will be addressed. Additionally, we try to bring our HING members who participated in the smaller engagements leading up to that year’s GEMA BHAKTI.”

GB19 serves as a culminating event for the HING SPP who has facilitated 22 international engagements with the TNI in 2019. These engagements include Search and Extraction, Joint Fires Subject Matter Expert Exchanges (SMEE), a Cyber Range Exercise, an air defense SMEE, a Pandemic Table Top Exercise (TTX), and an operational design seminar. Each of the engagements between the HING and TNI have been between one to two weeks in duration and have been held in locations throughout the nation of Indonesia, the State of Hawaii, and recently in the State of Colorado in conjunction with the annual conference of the National Guard Association of the United States in September.

“The relationship between the TNI and the U.S. Military is one of professionalism and mutual respect,” said Brig. Gen. Kenneth Hara, Hawaii Deputy Adjutant General. “The relationship has grown because of exercises and bi-lateral engagements such as GEMA BHAKTI and is critical because someday we may deploy together in response to a natural disaster or other contingency.”

2019 marks the 70th anniversary of relations between the U.S. and Indonesia. The format for this year’s GB19 is a STAFFEX, where combined staffs from C1 (Personnel) to C9 (Civil Affairs) are given a military scenario to plan a response to. This year the staff was tasked with moving the situation presented in 2018’s GEMA BHAKTI to a new phase of stability and peace keeping operations. The exercise scenario included a fictional country who is experiencing instability at its borders, and is also destabilizing neighboring nations in the region. The variables that the staff must plan a response to were taken from real-world events.

“From this event we [the TNI and U.S. Military] have the opportunity to sit together and share the same perspective as a staff,” said Maj. Adek Kurniawan, TNI exercise controller of GB19. “We learn from each other. Indonesia learns from America and America learns from Indonesia. We are perfecting each other. We hope the outcome is that we are unified in our knowledge of how to get to an ‘end-state’ or goal on this scenario of GB19.”

A key aspect to the last few iterations of GEMA BHAKTI has been the implementation of the Multi-National Force (MNF) Standard Operating Procedures (SOP). The MNF SOP is a planning framework that aims to improve joint/combined capabilities integration and operational-level planning of Maritime Security operations, Humanitarian Assistance and Disaster Response, and countering transnational threats; to enhance professional development through bilateral, joint, operational-level planning and processes in accordance with the MNF SOP and international best practices; and to improve civilian-military coordination in shared domains (air, land, maritime, space and cyber) during crisis response operations.

“Having all the military branches from both nations’ militaries as well as the Hawaii National Guard, adds another layer to the planning,” said Maj. Isaac Floyd, HING officer. “Working with the Marines and the Navy, who have capabilities that I do not have a depth of knowledge in, I get to learn what they have to offer in this kind of operational environment. For instance, what the Marines and Navy provide as far as medical support is massive compared to what the HING could provide in the exercise scenario. Even if we plugged in to the active duty Army, which could only supply a small piece to this puzzle … adding the Navy and Marine Corps and their different resources drastically changes the operational picture.”

GEMA BHAKTI has evolved though-out its seven iterations, having gone from a simple table top exercise to this full combined STAFFEX. The plan is to continue growing the exercise into a Command Post Exercise and then finally, a large Field Training Exercise held in multiple locations throughout Indonesia within the next few years.