117th Mobile Public Affairs Detachment (Hawaii)
Story by Staff Sgt. Christopher Martens
Thursday, June 13, 2019
#####
Soldiers of the Hawaii National Guard’s 1st Battalion, 487th Field Artillery Regiment are in the process of making history, all while performing a mission with important implications for the future of air defense artillery, field artillery, and the Hawaii Army National Guard. The 1-487th is the first field artillery unit to be assigned to perform the C-RAM protection mission. 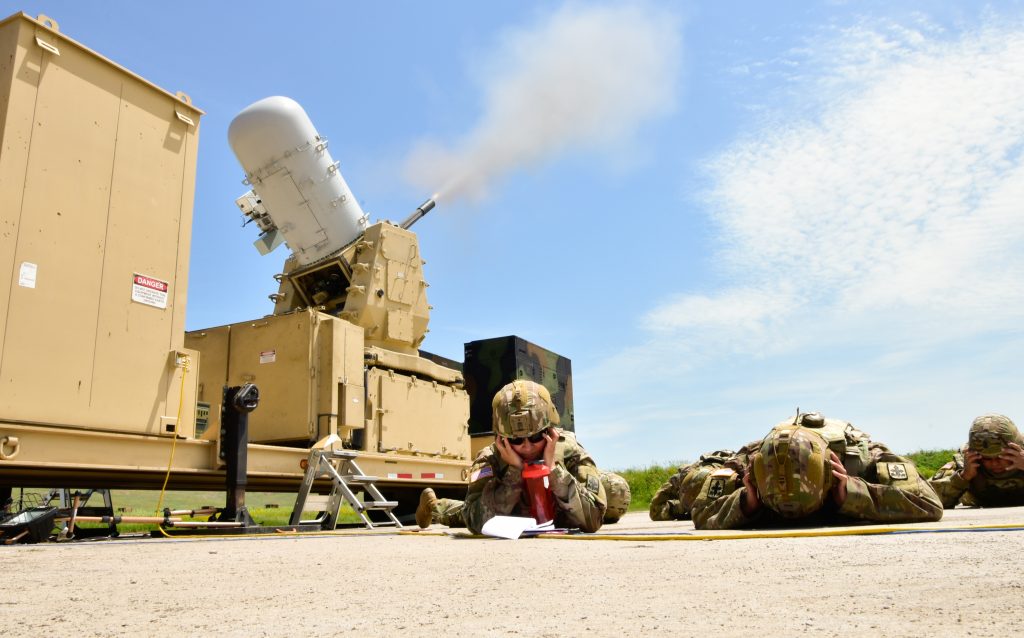 The Counter-Rocket, Artillery, and Mortar System, or C-RAM, was developed based on operational needs identified in 2004 during military operations in Iraq. The C-RAM mission has one objective; to protect people and installations from attack from enemy rockets, artillery, and mortar fire by intercepting and destroying those threats mid-flight. Most often recognized by the visually stunning and menacingly sounding Phalanx Weapon System (LPWS) “gun,” the C-RAM system is several sub-systems working together to identify, track, engage, and destroy incoming rockets, artillery, and mortar threats.

As for the Soldiers of the 1-487th, they are honored to be the first field artillery unit selected for the C-RAM mission.

Despite the excitement, Migita knows his Soldiers are only focused on learning their new responsibilities and preparing for their mission. Migita admits the C-RAM mission is different from the traditional roles found within the field artillery realm, but he is extremely satisfied with how his Soldiers are adapting.

“The Soldiers stepped up,” said Migita. “They’re all very battle-focused on making sure they know their jobs and making sure that we’re successful.”

That focus is well placed. According to Migita, in addition to this being the first deployment for many in the 1-487th, the Soldiers are also well-aware of the attention Army leaders are paying to their performance on this mission.

Until now, only Air Defense Artillery units have been responsible for the C-RAM. However, as the Army continues to push for a more efficient and versatile force, the decision was made to expand the C-RAM protection mission to include field artillery units.

“There was a need to add another organization moving forward to provide balance across the formation in terms of deployment,” explained Maj. Angel Rios-Pelayo, 31st Air Defense Artillery Brigade, who is with the command tasked with validating the 1-487th Soldiers for deployment.

According to Rios-Pelayo, the ability to task field artillery units with the C-RAM mission not only increases the resources needed to sustain current C-RAM operations, but also for the possibility of expansion, should the need arise. Ultimately this means an increased ability to protect even more service members as they perform their missions around the world.

After having the opportunity to evaluate the 1-487th, Rios-Pelayo is confident that the decision to include the Hawaii Army National Guard’s field artillery unit was correct.

“The 1-487th proved that they can change their warfighting function from firers to protection,” said Rios-Pelayo. “I have no doubt they are going to execute the mission above and beyond, and that they are going to create the precedent in which air defense and field artillery can work together and assume each other’s missions if required.”

Members of the validation and training team from the 31st Air Defense Artillery Brigade are not the only ones happy with how well the Soldiers of the 487th are performing. Brig. General Kenneth Hara, Commander of the Hawaii Army National Guard, had the opportunity to observe the 1-487th training at Fort Sill, and to speak with members of the 31St Brigade.

“I am totally impressed with their ability to transition from being a standard field artillery unit, to doing this C-RAM protection mission,” said Hara.

The ability of the 1-487th Soldiers to make such a smooth transition may have an even greater implication for other National Guard units according to Hara.

“If this mission becomes enduring, the National Guard may pick up the entire mission,” opined Hara after speaking at a ‘town hall’ type meeting with members of the 1-487th.

That greater reliance on the National Guard for the C-RAM mission seems even more likely to Hara after having the opportunity to visit Fort Sill and observe the Soldiers of the 487th in action.

“I have heard nothing but accolades from the contractors and military units that helped prepare this unit for deployment,” explained Hara. “Seeing them progress, from putting them on the plane in Hawaii, and now having E3’s and E4’s briefing a one star general; their confidence, their knowledge of the C-RAM system, and just how proud they are, I’m very proud of them.”