154th Wing Public Affairs
Story by Senior Airman John Linzmeier
Wednesday, September 4, 2019
#####
More than 700 Airmen from across the country and a team from the Royal Australian Air Force wrapped up a large-scale, combat-aircraft exercise Sept. 4, at Joint Base Pearl Harbor-Hickam.

Since kicking off on August 21, dozens of fighter, command and control, and tanker aircraft were launched each training day of the Hawaii Air National Guard led exercise, Sentry Aloha 19-2. Two training missions were carried out daily, one in the morning and a second in the afternoon.

Lt. Col. Matthew Ohman, Sentry Aloha Exercise Director, said the routine exercise is held to provide tailored and cost-effective training for all participants, with a focus on fourth and fifth generation fighter integration against an advanced threat. 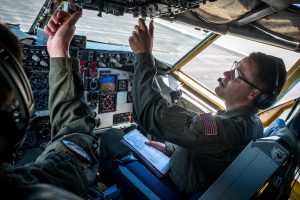 While Hawaii-based aircraft, assigned to the 154th Wing, practice combat sorties on a regular basis, dissimilar air combat training offers more diverse and realistic training, resulting in heightened levels of readiness for pilots and the hundreds of support Airmen from a broad variety of career fields. In total, members from 20 units from 15 states and one unit from Australia came to Oahu to participate in Sentry Aloha.

Similar to real-world flight operations, the success of each mission relied on the process of inflight refueling. A team of KC-135 Stratotanker from the Nevada, Utah and Hawaii ANG flew alongside the fighters and transferred fuel to each airframe, prolonging flight time and potentially maximizing lethality in the battle space.

This iteration of Sentry Aloha also featured the integration of an airborne early warning control system, provided by members of the Royal Australian Air Force No. 42 Wing. An Australian aircrew utilized a high powered radar aboard an E-7A Wedgetail to monitor the battle space and provide friendly forces with an advantage over their opponents.

“The force integration is the main thing we’re looking to work on when we’re coming here, with the Raptors, [Falcons] and Eagles,’ said RAAF Flying Officer Nelson Mirus, Wedgetail aircrew member. “What we provide, with the airborne early warning, is giving them a heads up and let them know what they’re flying towards; and they can derive their own tactics according to that.”

While the majority of traveling participants flew halfway across the Pacific Ocean to join in the exercise, small teams of Airmen from the Hawaii Air National Guard’s geographically separated units were called upon from neighboring islands.

Members of the 292nd Combat Communications Squadron, in Maui, relocated to JBPH-H to set up lines of radio communication for the Australian Wedgetail and provided satellite network capabilities for visiting ANG members.

Unlike communication technicians at a normal squadron, ‘Combat Comm’ Airmen specialize in installing mobile communication centers at virtually any provided location. These agile-capabilities were demonstrated during an inclimate weather exercise in Saipan this year, which was used to provide command and control to a dispersed team of F-22s.

Since the last iteration of Sentry Aloha, held in December 2018, the 154th Wing’s Raptor cadre has grown considerably, as additional F-22s, originally assigned to Tyndall Air Force Base, Florida, are now maintained and operated at JBPH-H. The Hawaiian Raptors belong to the Hawaii ANG’s 199th FS and also operated by active duty Airmen from the 19th FS.

While the additional fifth-generation aircraft and large force employment of new partners serves as a force multiplier, Col. Michael Blake, 154th Operations Group commander, indicates that the goal of Sentry Aloha has constantly remained the same.

“Our way of measuring success is in making sure that everyone is a better tactician,” said Blake “a better subject matter expert when they leave than when they arrived.”