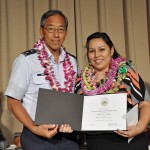 Kimberly Magday has consistently performed her work in an exemplary and exceptional manner.  Her efforts to take on two critical functions while being temporarily assigned to another position, reflects her conscientiousness and dedication to ensuring that OVS operations were sustained.  Ms. Magday’s efforts with the veteran’s outreach program and exceptional work during the 60th commemorative anniversary of the Korean conflict ceremony is yet another example of her willingness to go above-and-beyond. 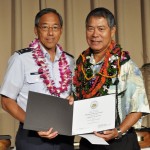 The 2013 manager of the year is Leighton Ah Cook, Civil Defense. The manager of the year award is for consistent success in performing the management functions of their job including: outstanding leadership, team building, and development of subordinates for improved performance and job knowledge.

Leighton Ah Cook performed his duties and responsibilities in an outstanding manner this past year.  Despite being short-staffed, he made sure the training and exercise sections fully supported the needs of the counties and state agencies.  Under his leadership, outreach efforts to the private sector reached new levels, bringing new organizations into the emergency management sphere throughout the entire state.  Leighton also coordinates and leads Civil Defense presentations to local and foreign groups about 24 times a year. 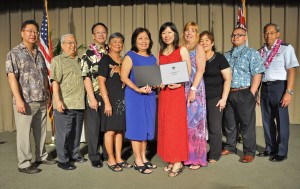 The 2013 team of the year is the Fiscal Office (Administrative Services).  The team of the year award is for a group of two or more employees in a work unit or cross-functional group that worked together by pooling their skills, talents, energy, and knowledge to accomplish a common goal that supports the organization’s mission and vision.

The fiscal team is the primary depository for all general and federal funds received for the department.  They are comprised of accountants, account clerks, and purchasing technicians who possess special skills, knowledge and work qualities that allow huge sums of monies to be processed in an orderly, accurate and timely manner.  Implementing in-house improvements and with no outlay of state funds, the team enhanced a number of current fiscal systems for reporting, tracking, and payroll, resulting in savings of approximately $500,000.