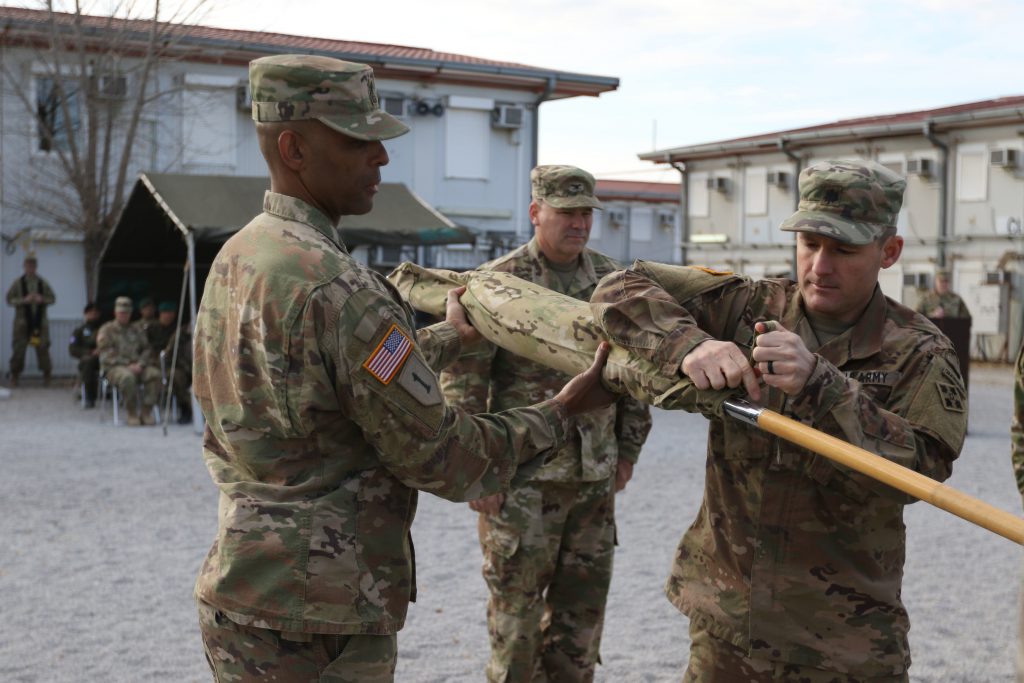 Kosovo Force (KFOR) Soldiers participate in a transfer of authority ceremony at Camp Maréchal de Lattre de Tassigny, Kosovo, Nov. 15, 2018. During the ceremony the command team from the 3-61st CAV cased their colors, signifying the completion of their deployment, followed by the 1-89th CAV uncasing theirs. This signifies the continual support of the KFOR Multinational Battle Group East mission and the enduring commitment NATO has to the people of Kosovo. (Hawaii Army National Guard Photos by Sgt. Tinisha Mellein-Fortson/Released)

PRISTINA, Kosovo – A transfer of authority ceremony was held to celebrate the accomplishments of the outgoing forward command post (FCP) unit and signify the start of the next rotation at Camp Maréchal de Lattre de Tassigny, Kosovo, Nov. 15, 2018.
U.S. Army Lt. Col. Donald Braman, commander of the 3rd Squadron, 61st Cavalry Regiment, 2nd Infantry Brigade Combat Team, 4th Infantry Division (3-61 CAV) relinquished command to Lt. Col. Kevin Kilbride, commander of the 1st Squadron, 89th Cavalry Regiment, 2nd Brigade Combat Team, 10th Mountain Division (1-89 CAV).
“Eight months ago the squadron assumed responsibility for the forward command post,” said Braman. “Since March, we have had many multi-national partners rotate out, we gained the addition of the Turkish COY TACON [tactical control] to the task force, and we have conducted many missions and operations the last nine months.”
During the ceremony, the command team from the 3-61 CAV cased their colors, signifying the completion of their deployment, followed by the 1-89 CAV uncasing theirs, signaling the official start of the mission.
“I want to personally thank Lt. Col. Braman and the entire 3-61 CAV team for all their hard work and their tireless efforts to ensure we are prepared to assume this critical mission,” said
Kilbride.

The 1-89 CAV assumed responsibility as the rotational FCP in Kosovo responsible for patrolling and enforcing security measures along the Administrative Boundary Line between Kosovo and Serbia.
“The FCP will continue to be a teammate, partner and soon a friend,” said Kilbride. “On behalf of the squadron, thank you again for all that you do and we couldn’t be more honored to work within NATO on this mission.”
The Multinational Battle Group-East is a NATO command, which conducts peace support operations in Kosovo to contribute to a safe and secure environment and freedom of movement for all citizens in Kosovo.