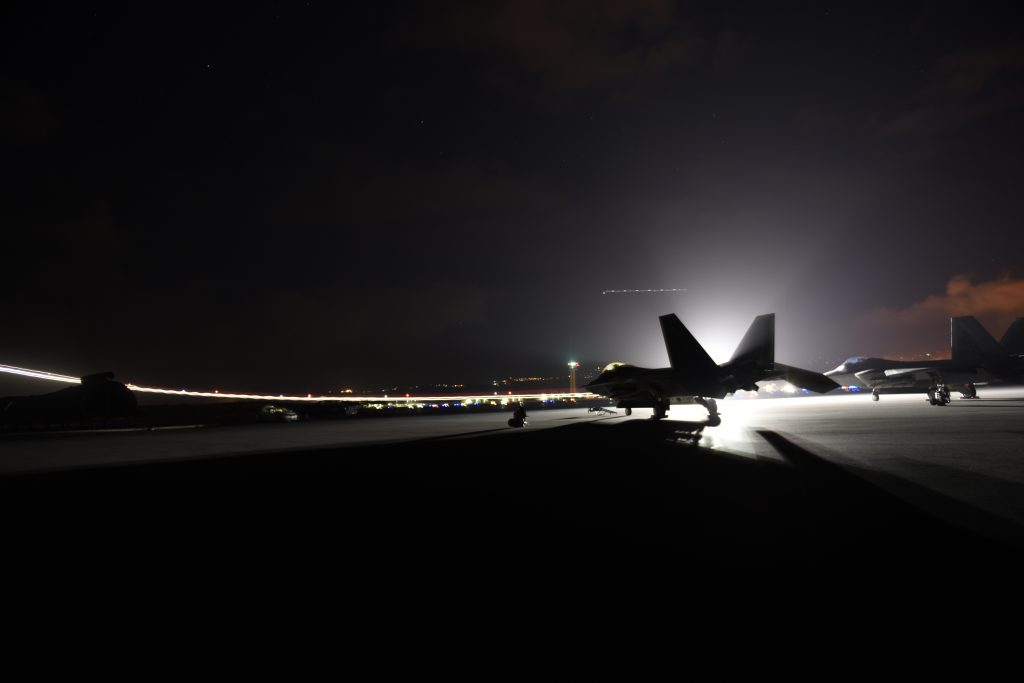 Security floodlights illuminate an F-22 Raptor sitting on the airfield of the Kahalui Airport OGG on Maui, Hawaii, on the evening of Aug. 1, 2019. The Hawaii Air National Guard (HIANG) flew four Raptors to Maui to ensure the aircraft would be able to divert to alternate airfields within the Hawaiian Islands in the event of any state emergencies. The Raptors had completed the first day of air divert training on the island. (U.S. Air National Guard photo by Tech. Sgt. Alison Bruce-Maldonado)

The Hawaii Air National Guard (HIANG) hosted an F-22 Raptor exhibit for the public at the Kahalui Airport OGG on the island of Maui, Hawaii, Aug. 2, 2019. More than 1500 visitors including military personnel, their dependents, extended families and friends, braved wind, high humidity and rain to get a close-up view of four F-22 Raptors in a secure area of the airport.

The HIANG flew the aircraft to Maui Aug. 1-3, to conduct F-22 training to ensure the aircraft would be able to divert to alternate airfields within the Hawaiian Islands in the event of any state emergencies. To support the Raptor divert airfield training and exhibit on Maui, more than 40 HIANG personnel flew to Kahalui, Maui, Jul. 31, on a C-17 Globemaster flown by the HIANG’s 204th Airlift Squadron (AS). Supporting personnel included HIANG recruiters, military air crews, maintainers, logistics and avionics specialists, as well as security personnel.