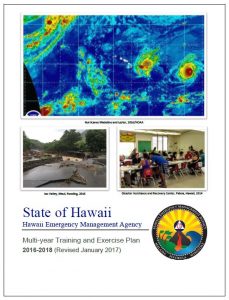 The State of Hawaii is especially vulnerable to natural disasters due to its unique geographical setting. Hawaii has seen numerous destructive disasters: a category 4 hurricane, Hurricane Iniki, which struck on September 11, 1992; Tropical Storm Iselle in 2014; devastating lava flows on the Big Island between 1983 and 1993 that destroyed almost 200 homes, and again in 2015; severe flooding in March 2006 resulting in a dam break that killed seven people and storms that caused extensive flooding and damage on Maui in September 2016 resulting in a presidential disaster declaration; and a magnitude 6.7 earthquake in 2006 that caused severe damage on the Big Island, isolated a Maui community and resulted in an island-wide power outage on Oahu. The March 2011 Japan earthquake and tsunami caused major damage and destruction, especially to the Big Island.  Tsunamis have accounted for more lost lives than the total of all other disasters in Hawaii.  On April 1, 1946, 159 people lost their lives in Hawaii from a devastating tsunami that struck the Pacific, particularly in Hilo Town on the Big Island.

In the aftermath from these and other past disasters, the citizens of Hawaii have demonstrated remarkable resilience. This ever-present potential for a disaster, compounded by Hawaii’s remote geographic location, underscores the need for a comprehensive, all-hazards approach for emergency preparedness and response.

The Hawaii TEP is the roadmap for Hawaii to accomplish the priorities described within this document. Hawaii Emergency Management Agency is pursuing a Corrective Action Program (CAP) that combines enhanced planning, realistic exercises and innovative training to prevent, protect, mitigate, respond, and recover from emergencies and disasters that do occur. Training and exercise activities are the cornerstones to improving Hawaii’s preparedness capabilities.