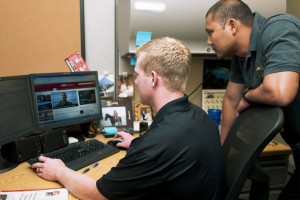 HONOLULU – Fluorescent lights hang above; though they appear to be on, the room seems eerily dark. A table, chairs and three computer monitors hanging from the ceiling along the wall are all that occupy the massive room. Two men and a woman stare at a 6 X 8 foot touch screen table. Each person’s eyes shift to the door as a fourth person purposefully enters and quickly crosses to the table and asks, “What do we have?” Without hesitation, one of the men selects a folder on the touch screen table, slides his hand across the table and throws the images on the wall. “Magically,” images appear on the monitors hanging along the wall. The information plastered on the screens is discussed by the team–The Hawaii Five-O team. Fans of the show will recognize the “magic table,” as McGarrett and his team meet around this table at least once during each episode to discuss information gathered about the bad guys. From there, solving the crime is set in motion.

The Hawaii Five-O scene is a seemingly magical interpretation of real world law enforcement. But, something or someone has to make that “Magic Table” work both on the screen and in real life. Information sharing scenarios like those characterized in Hawaii Five-O, though maybe not quite as “high tech,” take place in real world law enforcement offices.

In Hawaii, one of the offices where information sharing is crucial is the High Intensity Drug Trafficking Area headquarters (HIDTA). But the question still remains, how to make the “Magic Table” work. It doesn’t happen in a vacuum. When it comes to Drug Trafficking Organizations (DTOs), that vacuum is partly filled by the National Guard Counterdrug criminal analysts.

In 1977, Hawaii Law Enforcement sought Hawaii National Guard helicopter transport in support of “Operation Green Harvest,” a marijuana eradication mission. And so began the Hawaii National Guard’s support to law enforcement agencies in the effort to curtail illicit drug trafficking. The passage of the Anti-Drug Abuse Act in 1988 established the High Intensity Drug Trafficking Area (HIDTA) initiative, and the 1989 National Defense Authorization Act, which established the Department of Defense as the federal government’s lead agency in support of law enforcement agencies for the detection and monitoring of illegal drugs in the Unites States, solidified the National Guard’s role as an integral support agency for law enforcement in the battle against illicit drugs and Drug Trafficking Organizations.

HIDTAs provide assistance to federal, state, local and tribal law enforcement agencies operations in areas determined by the office of National Drug Control Policy (ONDCP) to be critical drug –trafficking regions of the United States. Hawaii received HIDTA designation in 1999. Today, there are 28 HIDTAs across the country.

Law enforcement agents are always on the road; they don’t have time to look through data bases. They’re out there trying to prevent crimes or capture criminals, Staff Sgt. Daniel, Hawaii Counterdrug criminal analyst, said.

“Basically, HIDTAs were founded as a coordination group,” Larry Burnett, Hawaii HIDTA director, said. HIDTAs require all law enforcement agencies be collocated, so a HIDTA is about coordinated information sharing. It’s about working together, Burnett said. Although Counterdrug criminal analysts and LEAs may work in the same building, that does not guarantee cooperation and or communication.

“We are able to touch every law enforcement agency in the state, and we are able to meet each officer and agent personally, which is of great value because it allows us to build trust,” Staff Sgt Kareem, Hawaii Counterdrug criminal analyst said. “Without trust, it is very difficult to make head way on a case.”

The DTOs exist all over the world be it the local drug dealer, a Mexican Cartel, or a Terrorists Organization raising funds through drug trafficking. In order to disrupt their business, criminal analysts may have to look at the local, national and international level of a DTOs’ operations.

“Many Guard members, because of their role as Citizen Soldier, have significant intelligence analysis training beyond their local LEAs. Airmen and Soldiers who work within the state use those analytical skills to optimize HIDTA’s ability to reach back to federal agencies for information and support,” Lt. Col. Gregory Scrivner, Hawaii Air National Guard 201st Intelligence Squadron commander, said.

“These positions here with the National Guard are some of the few positions in the country than can allocate and talk to local, state and federal officials on the same level as the intelligence community,” Nathan said. “It’s unprecedented that we can reach back to the Department of Defense, Homeland Security, the national level and the international level and bring that information down to the local level; It’s a bridge we didn’t have before 9/11.”

While analysts perform their state Counterdrug mission, they are continuously sharpening their federal mission skills; skills they can take to their Combatant Commander’s in a deployed environment.

“It’s the same skill set, different pieces of information, different customers, different gobs of information that they are digging through,” Scrivner, said. “If I get them [analysts] doing things in the intelligence community whether it’s state or federal, I’m going to win because they’re going to be learning something new; that’s a win for me.” Counterdrug criminal analysts are a curious bunch. They dig, search, analyze and present information to law enforcement agents who wind up around the “Magic Table” discussing information and its implications to a given case.

“On Hawaii Five-O the four of them just pound on the table a little bit ‘zing’ and fling it [information] up on the wall. The magic wall displays all that info, but it takes a lot of brain power to put all those links and notes together to develop a case. It doesn’t happen in 45 minutes,” Scrivner said. “These are all the guys [Guardsmen] that are underneath the ‘Magic Table’ that are doing all that work that it takes for the ‘Magic Table’ to work.”

“HIDTA, from day one, has lived or died by the Guard,” Burnett said. “It’s the heart beat that keeps us going.”