Posted on Dec 9, 2016 in Information and News Releases 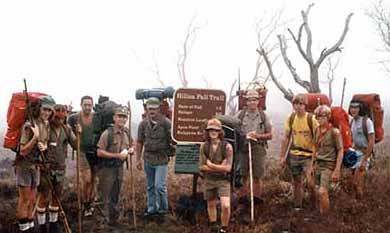 Boy scouts camping at Halape Beach on the Big Island in 1975 were hit by a locally generated tsunami in the middle of the night. The scout leader and a local fisherman were killed. Take a trip back in time and read more at the Pacific Tsunami Museum website http://tsunami.org/8stories/narratives/13michael_stearns_halape.html

On November 27, 1975, ten people in Boy Scout Troop 77 set out on their annual hike in Hawai’i Volcanoes National Park down to Halape. Ever since he was twelve, Mike Stearns spent his Thanksgiving weekend at Halape.

At age sixteen he was the oldest scout and senior patrol officer. The troop hiked in light fog down the trail. Five boys decided to camp a half mile south at Boulder Bay, where a new shelter had been built. Four adults and one scout remained at Halape.

Each scout hung their pack, tying their shoes to the frame on the rafters of the lean-to. This was so that no rats, centipedes, or other animals would surprise them the next morning.

On November 29th, a moonless night, Mike and the others were violently awakened by a 5.7 magnitude earthquake, followed by a 7.2 earthquake. “Get out of the shelter! Get behind the rock wall,” Mike screamed. The scouts dragged themselves behind a three-foot wall on the ocean side of the shelter. Boulders crashed down the hillside.

Mike decided to return to Halape and check in. Unfortunately, no flashlight worked. Using only a pen flashlight, they frantically tried to untie their shoes from their packs. “Oh, my God! Look out!”

Mike scrambled to escape the path of a wall of water submerging Boulder Bay. He gripped a post and clung on as the tsunami shoved him and the shelter to the back of the bay. Suddenly he felt a jolt against his head.

The second wave was even bigger. Mike closed his eyes and repeated, “I wanna die fast.” This wave slammed him against lava, bushes, and the shelter repeatedly. Mike felt the wave receding and dragging him out to sea. Before it got too deep he groped for something, anything that could save him. He found land and propped himself up and sprinted to higher ground without shoes or glasses, and with sopping clothes. He touched his head where a throbbing pain had begun; his fingers were covered in blood.

“Tim, Fal, where are you? Leif?” They crossed over the lava, tripping and falling. Mike suppressed his cut with his yellow t-shirt. Fal was their leader, for neither Tim nor Mike had their glasses, and they could not see well.

Before daybreak they reached the one-mile mark to Halape and Mike stated, “That’s good enough.” They sat shivering in the piercing wind waiting for the sun to come up. In the early morning light a single engine plane cruised above. Mike said, “Fal, go down to Halape and tell them we need to be rescued”. In the end, the boy scout leader, Dr. Mitchell, as well as a local fisherman, died in the event.