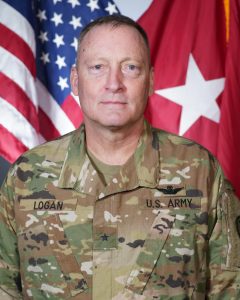 Brigadier General Stephen F. Logan assumed his duties as the Assistant Adjutant General – Army, on Dec. 5, 2019; took command of the Hawaii Army National Guard on Oct. 17, 2021; and serves as the Deputy Adjutant General for the State of Hawaii, Department of Defense.

Brigadier General Logan received his commission as a Second Lieutenant of Infantry through the Hawaii Military Academy, Officer Candidate School, Hawaii Army National Guard in 1983. He has served in numerous positions of increased authority and responsibility from platoon leader through Chief of Staff of the Hawaii Army National Guard including other key staff positions. In 2012, Brigadier General Logan deployed as the deputy commander of the Operations Coordination Center – Regional Command South, Security Forces Assistance Advisory Team, Kandahar, Afghanistan.

In addition to his federal mobilization, Brigadier General Logan served on several state missions in support of local authorities. Most notable were his duties as the Title 32 Deputy Commander of Joint Task Force – 50 in support of the Kilauea volcanic eruption response in 2018.

He holds a Master of Strategic Studies from the United States Army War College and a bachelor’s degree in Criminal Justice from Chaminade University of Honolulu.  He retired as a Metropolitan Police Lieutenant from the Honolulu Police Department in 2004 and holds both military and civilian rotary and fixed wing qualifications.  Throughout his career, Brigadier Logan has flown the C-26, C-12, CH-47, OH-58, UH-1, MD500D, and MD520N aircraft.

He is married to the former Darcie Imose and has two daughters, Naiya, and Karys.