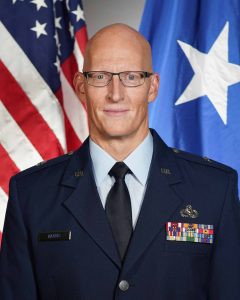 In 1998, General Harris graduated from Northwest Christian University with a Bachelor of Arts in Business Administration, and then commissioned through the Academy of Military Science. In 1999, he completed the Aircraft Maintenance and Munitions Officer course and served in several key maintenance leadership roles, culminating as 154th Maintenance Group Commander in 2015. He has over 34 years as a guardsman.

The date of publication indicated on this biography reflects the most recent update. It does not necessarily reflect the date of printing.