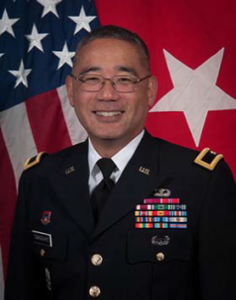 He serves as the principal advisor to the Adjutant General and is responsible for assisting the Adjutant General in formulating, developing and coordinating all programs, policies and plans affecting the Hawaii National Guard and its more than 5,000 citizen soldiers. Additionally, General Tamashiro serves as the Director of JointStaff where he manages the military functions of the Joint Staff and is responsible for the joint military programs that pertain to the command, control, operation and implementation of contingency plans for domestic operations and for response to a wide range of emergency operations. General Tamashiro is certified as a Dual Status Commander and represents the Adjutant General in a variety of forums dealing with federal and state agencies and National Guard Bureau matters.

General Tamashiro was commissioned as a Distinguished Military Graduate in the Field Artillery on June 10, 1984 through the Reserve Officer Training Corps program at DePaul University in Chicago, Illinois. He served on active duty from 1984 to 1988 as a Company Fire Support Officer, Battery Fire Direction Officer, Battery Executive Officer, Battalion S1 and Battalion Fire Support Officer. In January 1989, General Tamashiro joined the 1st Battalion, 487th Field Artillery of the Hawaii National Guard. As a Battalion Commander, General Tamashiro was mobilized on August 15, 2004 and deployed as part of the 29th Infantry Brigade Combat Team’s deployment in support of Operation Iraqi Freedom.

Veterans of Foreign Wars of the United States