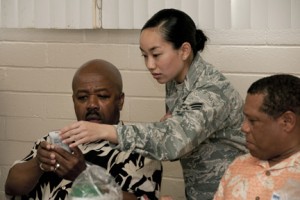 A representative from the Attorney General’s office presented statistics on the KOA program based on data collected since the inception of the program in January 2008. The information provided insight to the community partners as to where they fit in the action plan designed to sustain the KOA program through the tough fiscal times that lay ahead.

“It is great to see the passion the Counterdrug people have for the KOA program,” said Kaipo Paiva, Hawaii Police Department, Waipahu Coalition.

That passion comes in the face of budgetary cuts that will leave the Counterdrug program with a reduced staff, which makes it increasingly difficult to be a part of the solution.

“Bringing coalitions and community partners together in the same room allows for synergy to occur,” said Tech. Sgt. Priscilla Bastatas, Hawaii National Guard Counterdrug Certified Prevention Specialist with the Civil Operations team. “It shows the KOA program has community support from those who share the same passion and drive for being part of the solution as we (CD members) do.”

The coalition members and community partners discussed the necessary steps CD has to take in order to deem the KOA program as an evidence based program. The possibility of increasing class sizes and schedule changes, a resource fair, and preparation for a first ever KOA day in August were also among the topics of discussion.

The KOA Family day coincides with the National Family Week and brings families who experienced the program back to reconnect and celebrate their successes. With data being of importance, this annual event will also serve as a venue for CD to collect follow-up data on those who attended the initial mandated classes, Bastatas said.

“Seeing the collaboration and the passion of these people [coalitions] makes me excited for the KOA program and the future of Hawaii’s youth,” Sgt. Bernie Bumanglag Hawaii Counterdrug Civil Operations team member said.

“It is exciting to work with someone who has the same passion and vision about the youth and their future as I have,” Paiva said.

As if to highlight the importance of coalition building and the collaborative nature of the forum, coalition members were able to solve issues of antiquated computers on the spot. The computer issue came to light during the discussion about the research taking place to make KOA an evidence based program. Had the coalition members not been in the same place at the same time, the computer issue may never have come to light, much less be resolved.

“It’s a wonderful thing to see adults coming together getting to the nitty gritty of helping the youth,” said Leroy Contee, Hawaii Youth Challenge administrator. “It’s all about the heart. To see people who care means a lot to me.”

As a member of the National Guard, care for the community can reach beyond the local community.

“Having acquired an international certificate as a prevention specialist equips me with the necessary skills to facilitate important information to diverse audiences,” Bastatas said. “As a Citizen Airman, I take great pride in being able to represent my country and state as both a member of the Security Forces Squadron for my traditional status (federal mission) and as a prevention specialist in the Hawaii National Guard Counterdrug Support Program (state mission.) Being in such a position allows me to be better at home and abroad, and I remain ever grateful for the opportunity to serve.”