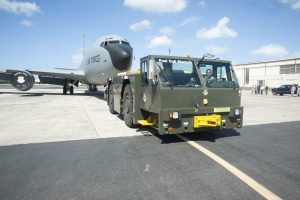 The Hawaii Air National Guard [HIANG] demonstrated the use of alternative energy to tow a KC-135 Stratotanker here July 18.

A U-30 Aircraft Tow Tractor retrofitted with hydrogen fuel cells was used to tow the 186,000 pound aircraft on the flightline of Joint Base Pearl Harbor-Hickam and demonstrate the efficacy of the technology, showing one way the U.S. Air Force could incorporate the use of renewable energy in conducting operational missions while lessening its dependency on fossil fuels.

According to the Hawaii Center for Advanced Transportation Technologies[HCATT], the event marked the first time hydrogen fuel cell technology had been used to tow a large USAF aircraft and was made possible through a collaborative effort of a consortium of public and private entities.

“We’re very pleased about this first demonstration. We’ve worked with U.S. Hybrid, TUG Technologies, and the Air Force Research Laboratory on this vehicle for three years and have garnered a lot of technical knowledge along the way,” said retired Col. Dave Molinaro, HCATT project manager. “But to get it in the hands of an Air National Guard Airman doing an operational mission is really what is most rewarding.”

Hydrogen for the U-30 is produced using HCATT’s electrolyzer at Joint Base Pearl Harbor-Hickam in a relatively simple process of splitting water with DC electricity into oxygen and hydrogen gas. The fuel cell in the tug combines the hydrogen gas and ambient air to produce electricity with byproducts being water, heat and zero greenhouse gas emissions.

The demonstration involved towing the Stratotanker from it’s normal parking area to a wash rack, located one quarter-of-a-mile away, to conduct its periodic corrosion prevention maintenance.

“I’ve never seen a tug move that smoothly and without the lurching common to other tow vehicles.” said Chief Master Sgt. Edward Tang, 154th Logistics Readiness Squadron vehicle maintenance superintendent who was among the dozens of HIANG Airmen on-hand conducting or observing the demo.

The tug demo was just one example of the HIANG’s efforts to incorporate renewable energies in it’s operations; in 2018 an HCATT hydrogen fuel cell generator provided the energy to power a multi-national training exercise while numerous facilities at the HIANG campus on JBPH-H receive their power from solar panel technology.

The tug will be put through its paces for another two to three years while HCATT continues to collect data in an operational environment.

“This is the technology that can help the Air Force be more resilient,” said retired Brig. Gen. Stan Osserman, HCATT director. ” I have a feeling that this will perform as well as our other prototypes, and the Air Force will want this kind of reliable, quiet, pollution free gear in its support equipment arsenal.”