Posted on Jun 6, 2022 in Information and News Releases, News Stories

HONOLULU — Hawai‘i faces a two-fold problem when it comes to natural disasters: The state is subject to hazards that can force many people from their homes, but its remote location and fragile supply chain make it much harder to ship in supplies to provide temporary shelter when a hurricane or tsunami strikes. 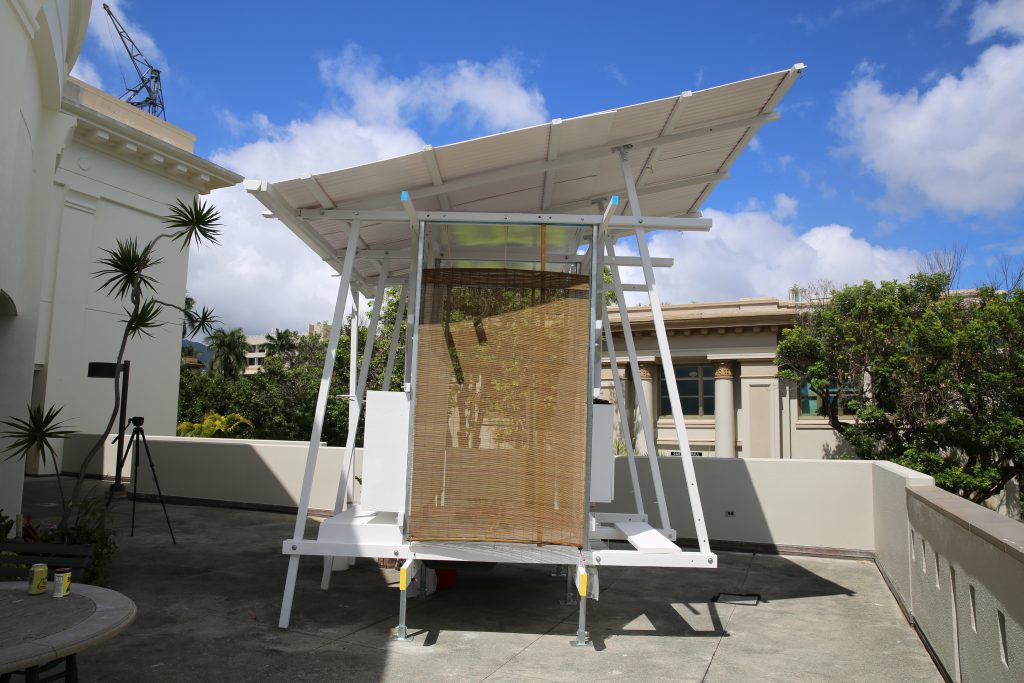 The Wiki Hale sits on display at the UH Mānoa School of Architecture, Honolulu, Hawaii, May 23, 2022 | Photo courtesy of the Hawaiʻi Emergency Management Agency

So the Hawaiʻi Emergency Management Agency (HI-EMA) and the University of Hawaiʻi at Mānoa forged a novel partnership to design a prototype of a temporary shelter that’s quick and simple to build, uses inexpensive standardized parts, and is easy and compact to store until needed.

The prototype, dubbed the “Wiki Hale” by the UH School of Architecture students who created it, could eventually be assembled in linked clusters to form communities with shared kitchen spaces and to house residents for weeks or months during recovery from a major disaster.

“Hawai‘i has been fortunate over the past few decades and avoided the very destructive major events with widespread damage that we’re most concerned about as emergency managers,” said David Lopez, HI-EMA’s Executive Officer. “An event like that could create a huge need for shelter, but it also could make it much harder to rely on outside resources to provide that shelter. The partnership with UH gave us an opportunity to explore a uniquely Hawai‘i solution to the specific challenges we face here.”

On the mainland, temporary housing after a disaster is sometimes provided using mobile homes trucked into the damaged area. That’s not a viable option in mid-Pacific. In addition, the Port of Honolulu and the Daniel K. Inouye International Airport — the two primary points where goods enter the state — are vulnerable to damage from catastrophic events affecting the south O‘ahu shore, which could complicate efforts to deliver recovery supplies to Hawai‘i.

A Local Design For a Local Need: The Wiki Hale

“The Wiki Hale is a post-disaster temporary housing unit prototype design,” said Amber Ternus, the project lead for the State. Ternus, a specialist with the HI-EMA resilience branch, works on projects designed to bolster the State’s ability to recover from disaster. 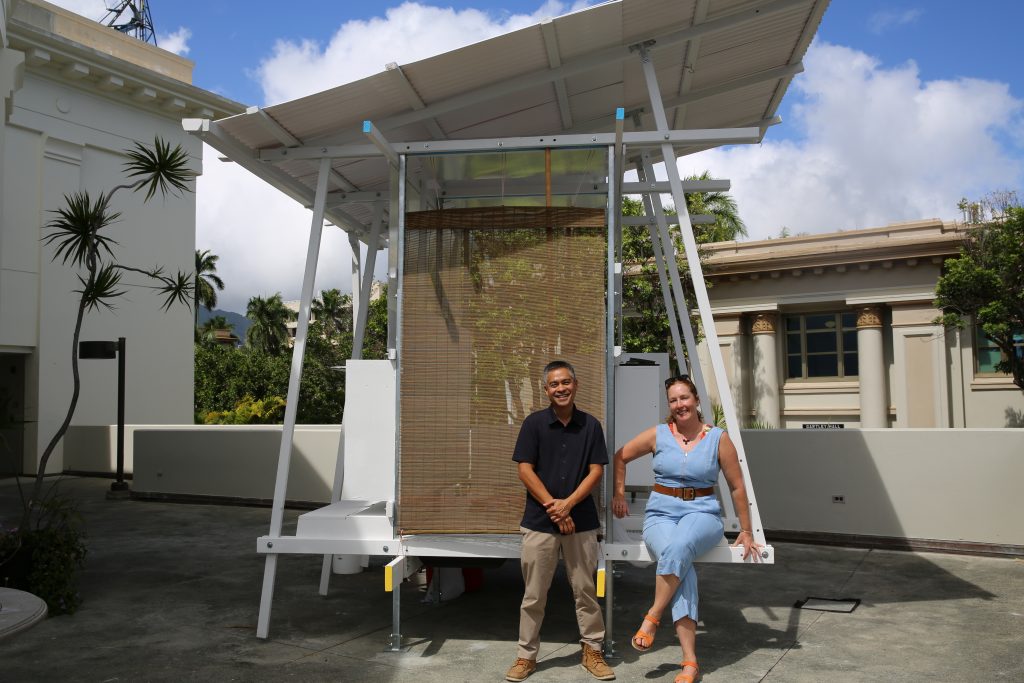 The project began with a cold call to UH Mānoa Assistant Professor Bundit Kanisthakhon, who was keen to take on the project, Ternus said. He quickly restructured his entire ARCH 201 class to focus on creating the unit.

The prototype unit was designed and built by the students with Hawaii’s tropical climate in mind.

“We centered all the design decisions around living in a tropical environment, living somewhere that has a high amount of sun, humidity and rain,” Ternus said.

Just as importantly, Ternus said, the entire prototype unit would only cost about $2,000. “We were very much wanting to design something that would be available and practical for people to use when there are very limited resources,” she said.

Though the prototype is the only one of its kind, the team behind Wiki Hale have made the plans open-source so that anyone could collect the materials and build their own.

The UH team also plans to continue to refine the existing unit and design to create more options and configurability.

Kanisthakhon said he hopes the prototype will act as a seed for other designs that are uniquely suited for the tropics and incorporate the outdoors environment in architectural decisions.

For Ternus, the project showcases the power of partnering to bring diverse perspectives to the table to address potential problems before a disaster occurs.

With hurricane season beginning, seeing things through that lens of preparedness is more important than ever, she said.

No state or federal funding was devoted to the Wiki Hale project beyond the standard personnel costs for the state employees who spent time supporting the effort.

View the brochure and plans here.