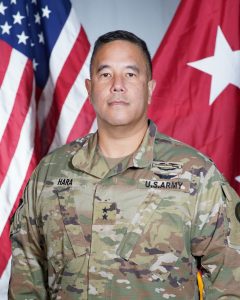 His responsibilities as the Director of the State Department of Defense include overseeing the training and readiness of 5,500 Soldiers and Airmen of the Hawaiʻi National Guard. He is the Director of the Office of Homeland Security, and the Homeland Security Adviser to the Governor. The State Department of Defense runs the Hawaiʻi National Guard Youth Challenge Academy and provides direct support to the Office of Veterans Services, an attached agency.

Hawaiʻi Revised Statutes, Chapter 127A-3 Emergency Management outlines the Director’s duties, which include:

Brig. Gen. Hara has served as the Deputy Adjutant General since Jan. 2019. In addition, he has been the Assistant Adjutant General – Army since Jan. 2018, and since Feb. 2018 Hara was dual-hatted as the Deputy Chief of Staff, Army National Guard, Operations, G3, Eighth United States Army Korea. In addition, he has served as the chief of the Joint Staff for the Hawaiʻi National Guard where he was responsible for day-to-day operations. Prior to that, he served as commander for the 29th Infantry Brigade Combat Team, Hawaiʻi Army National Guard.

Brig. Gen. Hara has served in command positions during deployments to Iraq, Kuwait and Afghanistan. In addition to his federal mobilizations, Hara has served on several state missions in support of local authorities. Most notably he played key roles in the response following Hurricane Iniki in 1992, after an earthquake struck the island of Hawaiʻi in 2006, and as the Dual Status Commander of Joint Task Force 5-0 in support of the Kīlauea volcanic eruption and Hurricane Lane responses in 2018.

Brig. Gen. Hara earned a Bachelor of Arts degree in human services from Hawaii Pacific University and a Master of Strategic Studies from the U.S. Army War College. 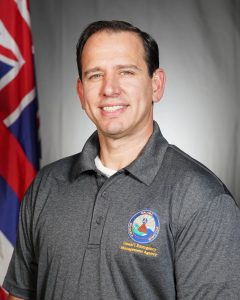 Luke P. Meyers, a Certified Emergency Manager who recently served as the as Executive Officer, Hawai’i Emergency Management Agency (HI-EMA), is currently the Administrator for HI-EMA.

Mr. Meyers graduated from the University of Hawai’i with a bachelor’s degree in Geography with a Climate Emphasis, paving the way for his future endeavors. He currently holds a Certified Emergency Manager (CEM) certification through the International Association of Emergency Managers, a nationally and internationally recognized professional certification for emergency managers.

Mr. Meyers has gained experience and provided guidance to a number of federal, state, local, and non-profit entities, including: the U.S. Geological Survey Pacific Islands Water Science Center (1990s); State of Hawai’i Civil Defense (2000); American Red Cross Mt. Rainier Chapter (2000); FEMA Region X and Washington State EMD following the Nisqually Earthquake (2001); Pierce County Department of Emergency Management working on Planning, Mitigation, and recovery, and acting as liaison for the Puyallup Tribe (2003-2009); City of Bellevue as City Emergency Manager (2009-2015); and City of Seattle as a Strategic Advisor (2015-2018). Maintaining an active role in his community, he has served as a City Council member for the City of Edgewood, and a Board Member of the Mt. View-Edgewood Water Company.

As an active member of the Emergency Management Accreditation Program, Mr. Meyers has served in the roles of Team Lead, Assessor, and member of the Standard Subcommittee.