Language not a barrier for HIANG Airman and Philippine Air Force 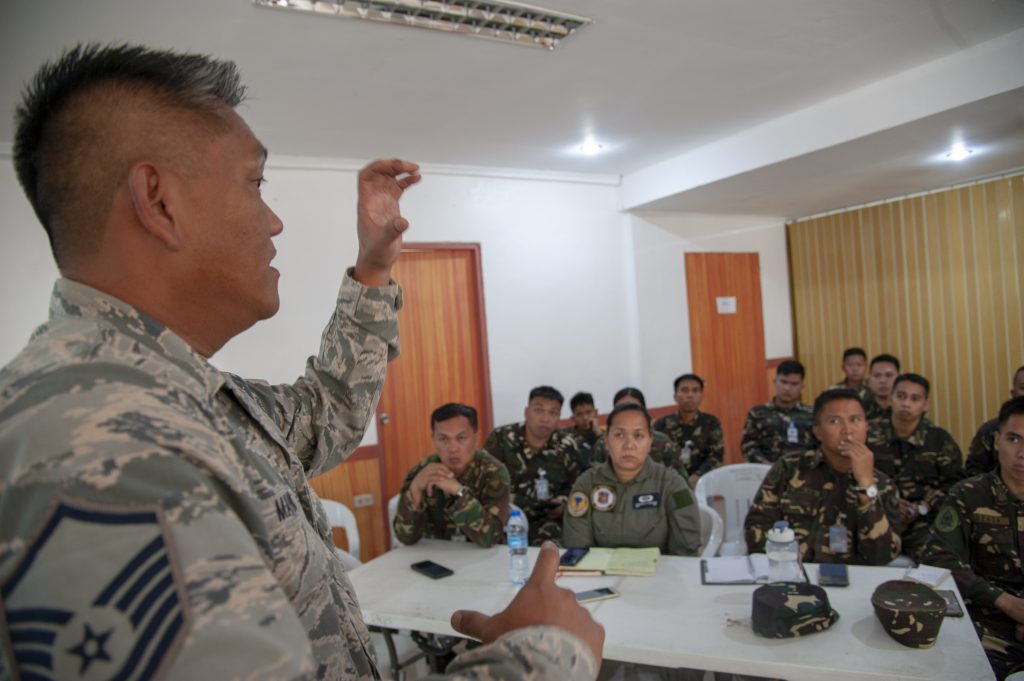 In a dimly lit conference room in the Philippine Air Force installation of Clark Air Base,, a radar expert is going over all kinds of radar maintenance techniques and procedures of the trade. While he’s a U.S. Airman from the Hawaii Air National Guard, he’s conducting the class in Tagalog – a dialect of the Philippines – maintaining a calm and confident tone as he leads the teaching session with a crowd of Philippine Air Force Airmen who are listening intently.

Master Sgt. Eugene Mariano, a ground radar systems Airman with the Hawaii Air National Guard 298th Support Squadron has worked on the latest technologies over the past 22 years of his career.

Because of his mastery of the language and natural delivery, onlookers could easily assume he is a member of the Philippine Air Force, only seeming to be separated by a distinct uniform pattern.

“I love working with the Philippine Airmen as they’re going through modernizing of their air defense systems,” Mariano said. “They’re like an open book. So respectful and eager to learn and the fact that I’m a natural Tagalog speaker certainly makes the communication easier.”

Mariano is part of a diverse team of Hawaii Air National Guard air defense experts that convene yearly to share air defense knowledge with Philippine Air Force counterparts through the National Guard’s State Partnership Program. SPP pairs a state’s National Guard with a partner nation and aims to build capacity and security cooperation through Subject Matter Expert Exchanges such as the one held this past Aug. 19-24 in various locations in the Philippines.

“This is a really cool mission. It’s pretty amazing to see the strides the PAF has made in their air defense,” Mariano said. “And it’s humbling to think that maybe I had a small part to play in all of this.”

The team includes several Tagalog speaking airmen, but Mariano is the most senior and has the most experience.

“I feel very proud for being a part of this team,” Mariano said. “It’s been a long process, but I think they are turning the corner.”

“Being able to speak the language is definitely an advantage,” said Mariano. “They don’t have to take the extra step to translate when they hear me talking. I think it helps to make the Philippine airmen comfortable. And when they’re comfortable, maybe it’s easier to learn and absorb the material.”

Mariano was born in the Philippines and immigrated to the United States in the 1990s. At an early age he knew he would be serving in the military; it was one of his passions. It wasn’t until he joined the Hawaii Air National Guard that he discovered that radar was also one of his passions. Blending his language skills with dedication to country and enthusiasm for his craft make him an effective mentor.

“I really like working on radars and it’s a very important piece to air defense. I really love that I’m able to share some knowledge and some of the lessons I’ve learned in radar maintenance,” Mariano said. “When I left the Philippines to come to the U.S. I never imagined though, that I would be returning as a U.S. Airman to work with some of my former countrymen.”

This year’s iteration marks seven years since the HIANG has conducted air defense SMEEs with the PAF. Mariano has been there from the start, having been selected as one of the original members of the team. According to team leader Lt. Col. Colin Yoshimitsu, Mariano’s contributions are integral to the group.

“Gino has been an important part of this team from the beginning of the program,” said Yoshimitsu, a mission crew commander with the 169th Air Defense Squadron. “Yes there is the bilingual language skills, but Gino has a unique ability to connect with people. He has that ‘aloha spirit’ that puts the PAF at ease and makes it very conducive to learning. I think the PAF have come to embrace Gino as a friend, not just some radar maintenance guy from the U.S.”

“I’ve been doing this for a while now,” Mariano said “I enjoy coming back every year and seeing some of the same airmen I met in the beginning. We’ve become friends to each other.”

Back in the dimly lit conference room in Clark, Mariano has a side-bar conversation with one of the PAF airmen.

“I told him, that your job and how well you do your job has a direct effect on the air defense of your country,” said Mariano. “I think he got it.”