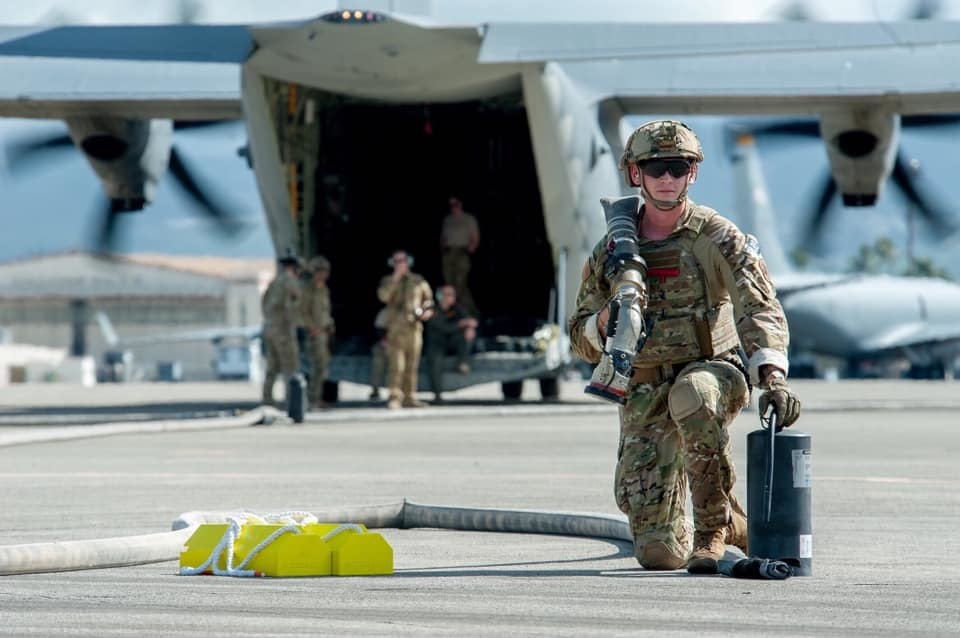 Airmen from the 27th Special Operations Logistics Readiness Squadron prepare to transfer fuel from an MC-130J Commando II to inbound aircraft August 3, 2019, at Joint Base Pearl Harbor-Hickam, Hawaii. A Forward Area Refueling Point operation was held to train petroleum, oils and lubricants Airmen for covert refueling operations in deployed locations where fueling stations are not accessible or when air-to-air refueling is not possible. Hawaii Air National Guard F-22 Raptors received fuel from the MC-130J while all engines were running. (U.S. Air National Guard photo by Senior Airman John Linzmeier)

The process is called a Forward Area Refueling Point, which entails the rapid transfer of fuel from one aircraft to another. On this occasion, an MC-130J Commando II and a formation of F-22 Raptors completed the procedure with all engines running. This unique capability makes it possible for fighter aircraft to land, replenish fuel and return to air-battle operations within a short timeframe.

Leading up to the FARP training, a similar operation was practiced on the windward-side of the island August 2, at Marine Corps Base Hawaii, Kaneohe Bay. Unlike the initial event, the second round had maximized the MC-130J’s refueling capabilities, enabling two fighter jets to receive fuel at the same time.

“It was helpful for us to have completed two operations in quick succession,” said Tech Sgt. Evan Frisco, 15th Maintenance Group Quality Assurance inspector. “At Kaneohe Bay, we were trying to figure out the best way to maneuver the aircraft around and get it in the best position. Once we got all the other groundwork laid, the team was confident enough to take on the two-jet operation.”

The FARP program is designed to train petroleum, oils and lubricants Airmen for covert refueling operations in deployed locations where fueling stations are not accessible or when air-to-air refueling is not possible.

Members of the 154th Aircraft Maintenance Squadron provided hands-on-training with the visiting FARP crew, as this was the first time the FARP operators have worked with the fifth-generation Raptors at JBPH-H. The guidance helped ensure every member is aware of the appropriate safety precautions and airframe layout.

“Familiarization training like this pays off a lot,” said Tech Sgt. Colby Mira,-Naeole, AMXS F-22 dedicated crew chief. “Because when they go to deployed locations, it’s possible for them to receive aircraft they’ve never seen before. This experience helps them to know where the receptacles are. When they do it deployed, it’s usually at night. It’s an elaborate process, so they’re going to need to be able to do it with night vision goggles on.”

While FARP Airmen, belonging to the MC-130J, are usually the only personnel on the ground during real-world scenarios, crew chiefs here worked alongside their Active Duty counterparts to incorporate a cursory inspection and end-of-runway inspection.

Airmen of the Hawaii Air National Guard have been preparing to hold a FARP operation here for more than a year, which entailed a series of ‘hot pit’ refueling operations – having Airmen refuel a running aircraft from a ground vehicle or hydrant.

Without FARP capabilities, U.S. Air Force aircraft are limited to air-to-air refueling and permanently installed bases for their refueling needs. However, when a fighter squadron has FARP support, options are vastly increased, as any accessible airfield or island can be used to replenish fighters and send them back to the fight.