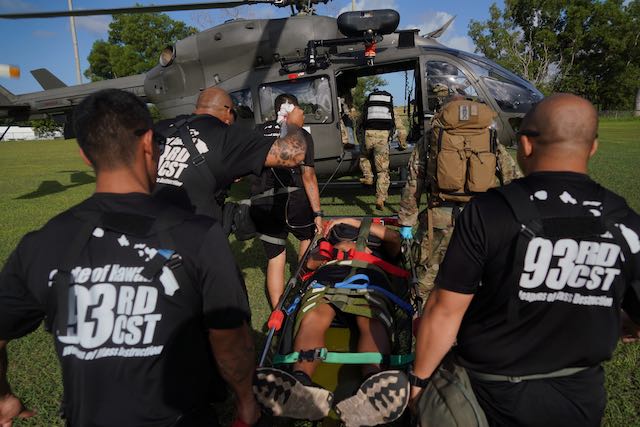 The Hawaii National Guard sent the 93rd Weapons of Mass Destruction Civil Support Team (CST) and the Medical Detachment 1 section of its CBRNE (Chemical, Biological, Radiological, Nuclear, Explosive) Enhanced Response Force Package (CERFP) section to Guam in the closing weeks of November 2019 to support the final Vigilant Guard exercise of 2019. Vigilant Guard is a series of exercises that take place in each FEMA (Federal Emergency Management Agency) region annually. The training exercise program sponsored by U.S. Northern Command (USNORTHCOM), in conjunction with National Guard Bureau, provides civilian-military first responders and emergency management personnel the opportunity to evaluate their capabilities and identify areas for improvement, in the most realistic, large-scale disaster scenarios possible. This is the second time Vigilant Guard has been held in Guam.

“It is important for the 93rd CST to participate in Vigilant Guard because we operate in the U.S. Indo-Pacific Command (USINDOPACOM) area of operations and based on our island location and geography we need to be able to respond to other locations and support our brethren here in Guam,” said Capt. Nathaniel J Calio, 93rd CST, Operations Officer. “We gain the opportunity to increase our interoperability with other partners through this exercise.”

The scenario in the FEMA Region 9 iteration of Vigilant Guard, encompasses the response to a category five hurricane, circumstances the Guam National Guard is familiar with, along with a domestic terrorism plot. The recovery and reaction to these notional natural and human-caused disasters required Guam’s first responders and the Guam National Guard to seek extra support from outside the territory. Hawaii, California, New Mexico, and Utah provided the needed assistance in the form of HERF (Homeland Emergency Readiness Response Force), CERFP, and CST units. These units consist of specially trained Soldiers and Airmen who help reduce human suffering and mitigate risk along with a vast array of equipment and vehicles outfitted to aid response efforts. All of this equipment and manpower was airlifted to Guam as it would need to be in a real-world situation,

“For this response we were fortunate to do a unit fly away,” said Sgt. 1st Class Chalcedony Silva, 93rd CST, Logistics NCO. “We brought four of our vehicles, one being our communication vehicle, which allows us to establish communications and access to the internet. We were also able to bring the survey vehicle which contains monitoring and sampling equipment.”

The Hawaii National Guard’s 93rd CST is comprised of six sections: command, operations, administration/logistics, medical/analytical, communications, and survey. The sections work together to assess and respond to situations where there are suspected CBRNE threats. There are 57 CST units in the United States. During Vigilant Guard, the Hawaii CST assisted to the response to multiple threats of natural and manmade origin.

“Hawaii’s readiness increases when we participate in exercises like Vigilant Guard because we get to interact with different agencies and other units,” said Sgt. 1st Class Ryan Baqui, 93rd CST, CBRNE NCO. “It forces us to step outside our comfort zone and mesh with other people and figure out new operational procedures and tactics to solve a complex problem.”

Hawaii’s CERFP Medical Airmen provided casualty collection, triage, and decontamination support to a collapsed structure scenario where there was a verified chemical contamination.

Vigilant Guard exercise organizers strive to keep each exercise as close to real-world scenarios as possible, in order to push the responders and help expose potential shortfalls so the participating organizations do not become complacent.