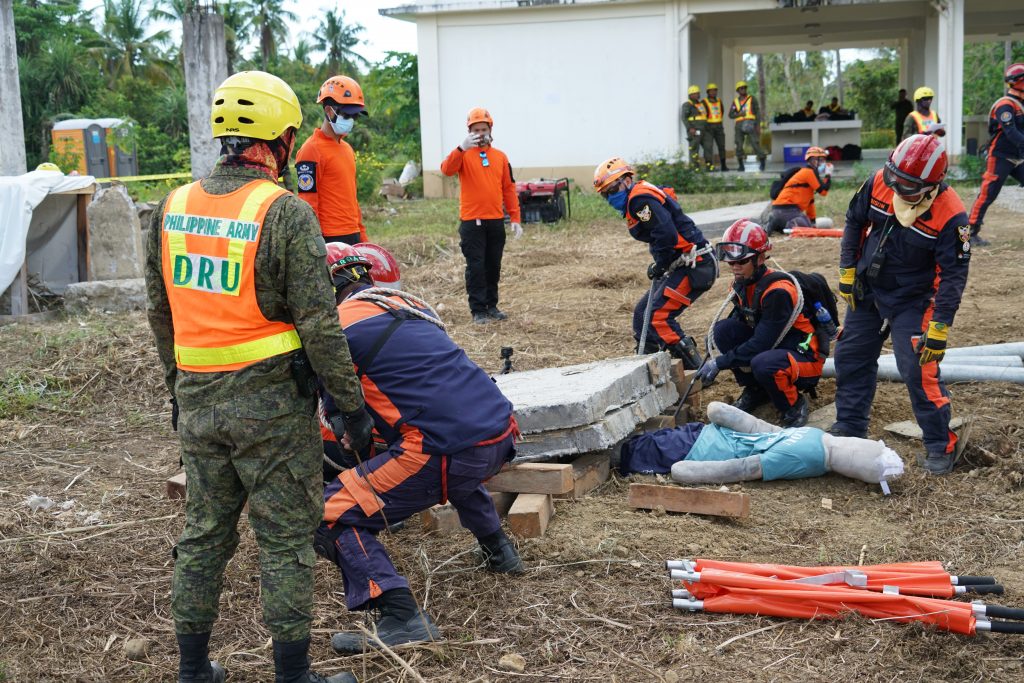 Engineers from the Hawaii Army National Guard’s 230th Engineering Company and Search and Rescue Soldiers from The Hawaii Army National Guard’s chemical, biological, radiological, nuclear, and high-yield explosive enhanced-response-force-package (CERFP) bolstered the U.S. Navy Pacific Partnership deployment in Tacloban, Philippines in March of 2019.
The Soldiers were deployed to the Tacloban region of the Philippines to share their operational expertise of their respective military specialties alongside counterparts from the U.S. Navy and the Armed Forces of the Philippines.
Over 20 Soldiers from the 230th company joined efforts with U.S. Navy Seabees in two Engineering Civic Action Program projects (ENCAP). The first of the two projects took nearly two months to complete. The first project was a disaster evacuation, multipurpose building in Santa Elena. The second project was a complete renovation of a birthing center that had been severely damaged in a recent typhoon and required work from the roof to the plumbing.
“We renovated the V & G Health and Birthing Center,” said Sgt. Mary Rose Reiner, Hawaii Army National Guard 230th Engineer Company. “There was some reconstruction of the roofing. We installed the light fixtures too. We also laid cement in some of the rooms. The whole building was repainted and re plumed. Our electricians also rewired a few systems.”.
Both of these projects will enhance the regions ability to care for their residents day to day needs as well as enhancing the regions disaster preparedness posture.
The Hawaii National Guard’s search and rescue Soldiers, who regularly engage with their counterparts of the Armed Forces of the Philippines as apart of the National Guard State Partnership Program, were on hand to assist in facilitating the largest Humanitarian Assistance and Disaster Relief (HADR) exercise that has ever been held on the island of Panay.
“We’re here to assist and help any type of training that they need to help oversee and expand their knowledge in the instructor portion of the training,” Staff Sgt. Cory Ito, Hawaii Army National Guard CERFP Team. “This has made us stronger in, as in, everybody getting together, knowledge that went out to the students, and we actually gained a lot of knowledge ourselves. From the local styles of rescue that they do to the actual mission of Yolanda. Overall, everything went well and safe, and the mission was completed.”
The HADR exercise involved participants from the Armed Forces of the Philippines, the Philippine Coast Guard and many different local government and non-government agencies. The participants were responding to a simulated earthquake scenario where a large structure had collapsed. Structures had to be shored up, while victims needed debris lifted off them and some areas required breaching to reach disaster victims. The Philippine Air Force also performed an aerial rescue off a roof top.
“Coming together is a beginning, keeping together is progress, but working together for the last two weeks is success,” said Mr. Jerry Yaokasin, Vice Mayor of Tacloban. “In doing the mission has fostered friendship among us. Trust and cooperation between our country and our partner nations. Mutual cooperation is vital. Humanitarian assistance and disaster preparedness, management and response. Especially of the people of this region.”
The goal of the Pacific Partnership is to improve interoperability of the region’s military forces, governments, and humanitarian organizations during disaster relief operations, while providing humanitarian, medical, dental, and engineering assistance to nations of the Pacific, strengthening relationships and security ties between the partner nations.