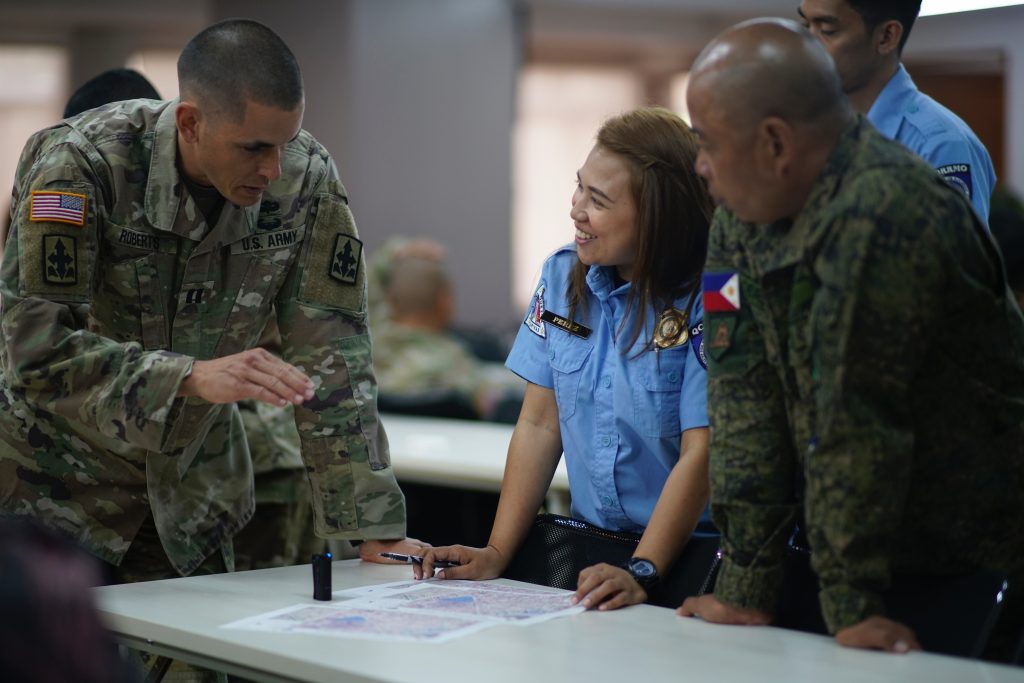 The Hawaii National Guard State Partnership Program recently sent its own military disaster managers along with civilian disaster managers from the state, and county levels to Quezon City to help facilitate a large scale disaster exercise that included the Batazan Hills Barangay. A barangay is the smallest administrative division in the Philippines and is the native Filipino term for a village, district or ward. In metropolitan areas, the term often refers to an inner city neighborhood, a suburb or a suburban neighborhood.
“Right now from Hawaii we brought the Hawaii National Guard Joint Staff, our Hawaii Chemical, Biological, Radiological, Nuclear and high-yield explosive Enhanced Response Force Package, and the Search and Rescue Element,” Col. James Barros, Hawaii Army National Guard Disaster Manager. “We also brought representatives from the Honolulu County, Maui County and the Hawaii Emergency Management Agency. We are additional eyes for the administrators to look and see if their processes are working.”
The exercise was held at a “command post” level and field training level and included the Quezon City Disaster Risk Reduction Management Council (QCDRRMC) and the Batasan Hills Barangay Disaster Risk Reduction Management Office (DRRMO). The Hawaii National Guard State Partnership Program brought civilian disaster management professionals from state and county levels to evaluate the Philippine municipality response to a simulated earthquake a first for the state of Hawaii and major expansion of the State Partnership Program.
“We’ll be working specifically with one of their high risk barangays, to see how that process works,” David Lopez, Hawaii Emergency Management Agency, Critical Systems Planer.
The exercise started with a day long seminar focused on Hawaii’s and Quezon City’s approach on disaster and risk management. The Hawaii Civilian disaster management professionals each presented their respective response plans and methodology followed by a series of presentations from the Quezon City and Batasan Hills disaster managers.
“There’s always benefits to having exercises,” Herman Andya, Maui County Emergency Management Agency Administrator. “Even for us here at Maui County. So by doing these exercises, we can determine and identify operational gaps, what kind of things perhaps you can improve on; processes, procedures… and then based on that, we can make those improvements.”
Teams of Hawaii National Guard disaster managers and search and rescue Soldiers also worked directly with their Batasan Hills Barangay counterparts in process development and hands on rescue techniques.
The exercise transitioned into a full scale mass casualty earthquake response drill after the academic portion was accomplished. The drill was designed to test Quezon City’s ability to communicate with a Barangay and to test the Barangay’s ability to prioritize it efforts and to know when it needed to request assistance.
“Our state partnership has been just with the Philippines’ Army, and we started, back in about 2009, with the 525th, Engineer Battalion,” said Barros. “As we’re growing, we’re looking at in the cities, in the barangay, expanding that first responder. So, as we continue to train, as we continue to socialize, we saw an opportunity here to partner with Quezon City and their disaster management folks, and that’s how this kind of evolved into a this type of exercise; for our folks to come in to help evaluate their processes and give them a good look at what’s working, maybe some areas that we can improve on.”
This is the first time a joint exercise from both a city and barangay level has been held in the Philippines. The final phase of the exercise had first responders from Quezon City and the Batazan Hills Barangay clearing rubble, retrieving survivors and victims from a collapsed structure, responding to a structure fire, and aerial evacuations.